A burst of creativity.

A friend told me the other day, “You could do that yourself.”

I was asking her if she knew anyone who could refinish my butcher block countertops. I hadn’t thought about doing it myself for more than a fleeting moment. Could I? I watched a youtube and called her back.

“I think I could do it myself, but I don’t have the power sanders. I’d have to buy them and all the other stuff—and if I did that, I might as well hire someone else to do it.”

“I have sanders and I’ll loan them to you,” she replied.

That settled it. I decided to go for the first of about 20 trips to our local hardware store and start the process assembling things to begin stripping, sanding, staining and lacquering my kitchen counters. We have a small kitchen, so the project didn’t look too overwhelming–when I began.

It was more work than I expected, I admit. Many trips to the hardware store—“where everyone knows my name…” Yes, they were calling me by my first and last name after a few days and it reminded me of this song from Cheers:

The problem started when I asked my husband for help. I nagged him into adding a second coat of stain one night after he came home from work. Bad idea.

The next morning we woke up to a gooey mess. The first coat of stain apparently didn’t dry all the way, and the second coat didn’t soak in–and he didn’t know that you ‘brush it on against the grain and wipe it off with the grain.’

Thank goodness for Google. I found numerous youtubes and sites on how to fix it—or basically start over. I needed to find something called “mineral spirits” to wipe off the mess and then re-sand. My buddies at the hardware store informed me that mineral spirits are illegal in our area and they sold me some paint thinner.

In the garage, I had been practicing each step on an old nightstand of my husband’s grandmother.

Here’s the biggest mistake I made in the process:

I tossed a pile of rags soaked with paint thinner on the old nightstand.

The next day, I could smell a faint burning odor like a distant fire. I was done with my counters and I began to put away my supplies. I thought, I need to throw away those old rags. Lo and behold there were no rags! Instead was a pile of charcoal that reminded me of the “snakes” we’d get for 4th of July when I was a kid. Also, there was a long metal object on top, which I finally recognized as a large flathead screwdriver without a trace of its hard plastic handle. I had used it to open the can of stain. After I removed the black charcoal smoldering rags I poured water on the smoldering nightstand, which was by the way, directly under the dry rough wood of the garage.

I almost burnt the house down—by doing a simple DIY project. Who knew that rags soaked in paint thinner could combust? Not me.

My next project, after the kitchen counters, was to salvage the nightstand. After all, it had belonged to Granny. Except for a little lingering smell of charcoal, I think it’s a keeper. 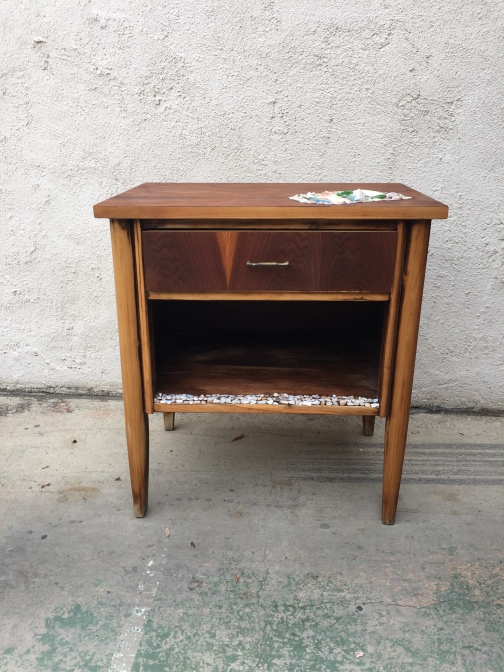