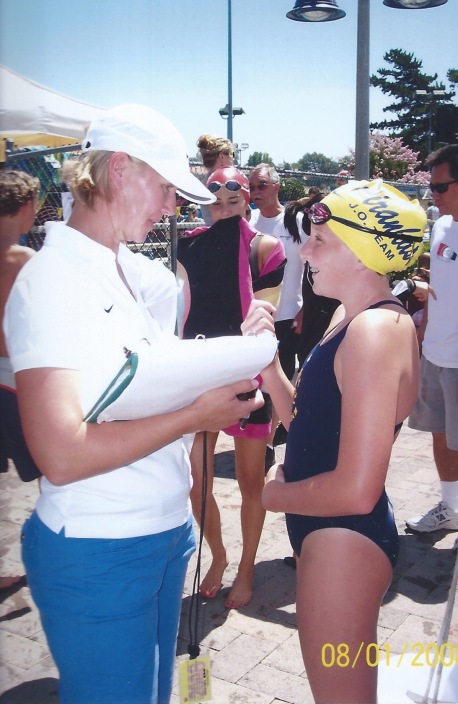 My daughter with a former coach.

I found an interesting article on a website The Ozone called “Morning Conversational: How Is Coaching Like Parenting?” by Tony Gerdeman.

I’ve always wanted to know, do coaches recruit the athlete? Or do coaches look at the entire family? Should that determine how we act or behave at meets? Is there something we parents should be aware of during the recruiting process? What I’ve discovered does come into play is that when we are away, back home–and our kids are at school on a team–often the coaches take our places as semi-parental units. Coaches are the adult figures in a position of authority. They make take our place as a sounding board, confidant, and guide.

From the article about how coaching is like parenting:

When recruiting players, coaches from all sports have to also recruit players’ families.

A couple of years ago, Ohio State running backs coach Tony Alfordtold a story about recruiting Ezekiel Elliott when he was at Notre Dame, and how he still remembered the interactions he saw between Elliott and his sister and how he could tell just through those moments that Elliott was the type of person he would like to coach.

When parents and guardians then sign off on their sons and daughters going to a particular school, they don’t do it thinking their child is going to be running amuck and without any supervision.

It is at this point when coaches stop being recruiters and become extended parents. Most players are too far from home to visit when they’d like, so coaches have to fill those needs where they can. Including providing the occasionally needed tough love.

“And if they need something mentally, then how do I make that happen for them? How can I help facilitate that? And make them understand, ‘Here’s where you’re at, here’s where we have to go, and here’s how we’re going to do it.’ And every kid is a little bit different.”

When I interviewed several coaches for an article for SwimSwam magazine, I found that coaches weren’t that interested in how parents behave during the recruiting process. Instead, coaches were far more interested in how the kids treated their parents. Jeanne Fleck, head coach of the Fresno State Bulldogs, said she watched in horror as one recruit screamed at her mom over the phone. Fleck thought that she’d pass on that swimmer because of her actions. She said she becomes a mother figure as much as a coach and she definitely wasn’t thrilled at the prospect of being treated by that athlete the same way she treated her mom.

When going through the recruiting process with our kids, we want coaches our kids will look up to. We want them to develop a mutual relationship of respect. If we’ve done our jobs well, our kids won’t be horrifying prospective coaches with their nasty treatment of others. Instead, they’ll impress with their kindness and warmth.

My daughter with her college coach.

What are your thoughts about coaches and parents and their roles?